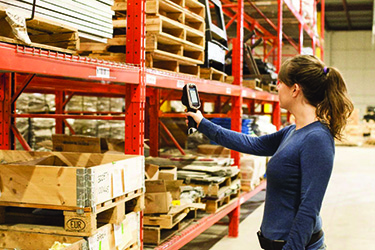 Android in the Warehouse

Android’s growth in the warehouse

The Android operating system got its start in consumer tech, but is gaining share in consumer and rugged devices. Here’s the rundown on how this shift impacts operations in productivity, visual instruction options and worker comfort.

When it comes to data collection and mobile work processes for the warehouse, it’s time to bring your “A” game. This thought not only reflects the pressing need to make order pickers faster and more accurate, but increasingly, it’s a tip of the hat to Android, the operating system (OS) that has gained a big share of the market for enterprise mobile devices.

Wireless handheld devices for the warehouse have been around for decades, using radio frequency (RF) communications and scanning to support key workflows and tasks. But the traditional handheld RF device has evolved in recent years, both in terms of form factor and OS options, as have devices for voice picking.

As a result, the relatively clunky handhelds of years past have in many cases given way to smaller, lighter gear more in sync with the consumer tech experience. New voice alternatives—such as vests with built-in speakers and microphone—are available, and smart glasses and smart watches are gaining in capabilities. Providers of solutions for warehouse operations see Android gaining share, not only with consumer devices that can be housed in a protective case or sled, but also in purpose-built, rugged devices. In fact, according to VDC Research, Android went from 5% of the rugged device market in 2015 to 30% of the market in the fourth quarter of 2016. However, VDC tracks the rugged device market across multiple sectors including retail, field service and delivery, with these other sectors having higher adoption for Android than warehousing.

“We’re seeing Android already becoming the dominant platform for enterprise rugged mobility,” says Mark Wheeler, director of supply chain solutions for Zebra Technologies. “The warehouse market is lagging in that adoption compared to some other sectors, but Android is definitely a trend.”

At Lucas Systems, a provider of mobile work execution solutions, Android is the OS of choice for 100% of new customers in 2017 for its voice-directed applications that combine voice, scanning and screens, according to Ron Kubera, executive vice president. “Not only do Android devices work well with Bluetooth headsets and wearable ring scanners, they have built-in near field communication (NFC) capabilities, and bigger, better touchscreens than previous generation devices to provide advantages in areas like the occasional visual instruction,” says Kubera.

What’s more, adds Kubera, it probably won’t be long before other Android devices like smart watches and glasses make gains in capabilities like battery life, which would allow them to serve as the computer and user interface device for voice. “The phone was just the first foray for Android into the warehouse,” says Kubera. “It won’t be long before a watch has all the capabilities needed so that you don’t have to tether it to a smart phone. I think in less than three years from now, it will be a totally different landscape in voice hardware.”

Vendors agree that what matters to users are issues like ergonomics, scan performance and picker productivity, rather than OS details, but at the same time, consumer-driven tech like Bluetooth can hold operational advantages. “It’s been fascinating watching the consumerization of this device market take place and the impact that drives from an operations standpoint,” says Scott Deutsch, president of Ehrhardt + Partner Solutions (E+P) North America, a provider of logistics execution software, including voice solutions.

The benefits of Android come from a blend of low cost, especially for consumer-grade devices, touchscreens and built-in support for standards such as Bluetooth and NFC. Android also is being used as an OS by providers of smart watches and smart glasses.

With voice solutions, touchscreens can be used for the occasional visual instruction in cases where a picture or list of information is more effective than voice alone, says Kubera. For instance, pictures on a screen could help a worker identify the correct pack size to pick, and seeing a list of base items on a screen can help a selector plan a pallet.

Kubera says Lucas has tested some smart glasses and has some users who have tested smart watches tethered to Android phones, but as of today, no users are using smart glasses in production, and the smart watches still need to be tethered to be used with Lucas’s voice system. But as Android glasses and watches mature, Kubera predicts further expansion of the device options for voice.

Since 2015, many Lucas customers have been using Samsung, Motorola and other Android phones for the company’s voice applications. Lucas certifies Android devices to ensure they meet requirements. According to Kubera, while Lucas’s experience is that these Android smart phones are durable and reliable for voice applications, but now that vendors like Zebra are offering rugged Android devices, some Lucas customers are choosing devices like the Zebra TC51.

The fact that some consumer Android phones can be purchased for $150 makes the value proposition for the traditional industrial devices vendors challenging, points out E+P’s Deutsch. At that price point, companies can afford a protective case and even if a device doesn’t last very long, the replacement cost is low.

There are some caveats to using Android phones, says Deutsch. First, they should be running newer versions of the OS that have strong security features. Also, for voice, a streamlined, non-screen device with a few buttons may be all that’s needed, in conjunction with a Bluetooth headset and perhaps a scanner. “E-commerce is forcing companies to look at ways of reducing operating costs in the warehouse, and because of that, I think people are going to be very smart about trying alternatives,” says Deutsch.

Consumer-based technology has had a “big influence” on the rugged industrial device market, concurs Bruce Stubbs, director of supply chain marketing for Honeywell Safety & Productivity Solutions. Honeywell has made a major investment in Android, he adds, introducing multiple devices that run the OS and have the ruggedness needed in DCs.

“There’s been some experimentation that has gone on in DCs with consumer-grade devices,” says Stubbs. “There are some people that believe in going with consumer-grade. A lot of times, they feel they are less expensive, but I don’t think they take into consideration the total cost of ownership.” These factors, he adds, include examining ruggedness under extreme conditions, and issues like adequate battery life for high-volume handheld scanning environments.

Stubbs agrees the brick-like handhelds of a several years back have transformed into slimmer, lighter devices that in some cases run Android and have hardened touchscreens, as well as more interest in wearables. “The consumer influence can be seen in the focus on end-user experience and the usability of the devices,” Stubbs says. “They are still rugged, but they have larger screens, they are suited to apps or app-type features, and they are more ergonomic.”

Zebra’s Wheeler agrees that industrial device vendors have adopted consumer-tech like features. Traditional RF handhelds have been “reinvented,” says Wheeler, with durable touchscreens and a lighter weight than the units of the past. “Devices have become lighter weight, and more ergonomic, which helps with accuracy,” says Wheeler.

Wheeler sees Android’s support for NFC and Bluetooth as leading to some enhanced capabilities. NFC offers another means of pairing with wireless devices that support NFC, while Bluetooth Low Energy beacons and technology offer a way to pinpoint the location of devices.

Zebra doesn’t offer smart glasses, says Wheeler, though it is researching the technology and its potential. “We see it as a promising form factor for certain workflows,” he says.

Vendors who do offer smart glasses to industrial markets include Vuzix. Its M100 smart

glasses are Android based and are said to be in use in sectors such as warehousing, manufacturing and utilities.

In another twist on wearables, E+P has introduced a vest system for its Lydia voice solution that, rather than requiring a headset, uses built-in speakers and a microphone. Pickers hear voice instructions through the speakers and simply talk back to respond to the system. Called VoiceWear, the vest holds a device and its microphone is direction-focused so it picks up the wearer’s voice easily, but not ambient warehouse noise, says Deutsch.

One user that has deployed the vests as part of using E+P’s voice solution is Pet Food Experts, a distributor of pet food and supplies with headquarters in Cumberland, R.I. The vests are being used at the Rhode Island DC with plans to roll them out to DCs in three other states, according to James Bettencourt, chief operating officer for Pet Food Experts.

While the overall voice solution is expected to bring a double-digit productivity improvement, Bettencourt says, the order selectors at the DC preferred not having to wear a headset. “What they really liked was the improved comfort, and they found no difference in the voice recognition with VoiceWear versus using a headset,” Bettencourt says. “And, since they are comfortable wearing a safety vest, it will be an easy transition.”

In the warehouse, any new device trend, whether it be Android phones or new types of wearables, needs to make workers either more productive or more comfortable to really catch on. As Deutsch sums things up, “when it comes to device hardware, you’re always thinking in terms of how it can optimize workflows and the effectiveness of the worker.”

Companies mentioned in this article:

Join the workforce mobility revolution with Zebra devices for Android